Geri Municipial 2019 EMDS issued the preliminary report on the 23 December Municipal Elections in... 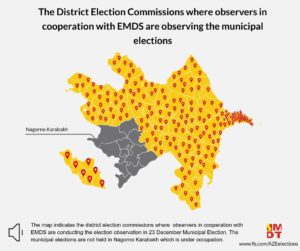 Election Monitoring and Democracy Studies Centre carried out the long-term observation of the 23 December 2019 Municipal Elections in Azerbaijan covering all stages of the electoral process – nomination of candidates, campaigning, election day voting and vote counting processes.

EMDS conducted the long-term observation in cooperation with 17 non-partisan observers while working with 125 observers on election day. On election day, observers were deployed to randomly selected and nationally representative 125 polling stations covering all of the 118 election constituencies based on Statistically Based Observation methodology. Elections were not conducted in 7 constituencies in the Nagorno Karabakh and other occupied territories.

EMDS also noted cases of pressure and harassment directed at candidates and observers by local executive authorities, ConEC and PEC members, and municipality employees. Destruction of campaign materials of some candidates displayed within the territory of PECs was not investigated. Overall, the campaign period was passive and uncompetitive.

The observation of all stages of the 23 December 2019 municipal elections by EMDS demonstrates that the elections were held in an environment with severe restriction of political freedoms, lack of equal and authentic opportunities for competition, and widespread violations during voting and vote-counting processes. The elections were marred with the lack of alternative choices. Therefore the municipal elections did not adhere to the requirements of the national legislation and international standards of free and fair elections and did not represent the true will of Azerbaijani public. 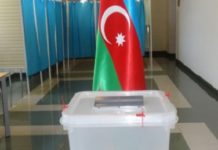